Curated by Maria Christina Didero, the Thick As A Brick Installation – Milan at Giò Marconi  shows a collection of over 100 Mousse Publications within brick structures designed by Kuehn Malvezzi and fabricated by Petersen Tegel Brickworks.

As  the Mousse Magazine site states:

Thick As A Brick goes back to simple, manual practices and ancestral materials – such as the brick used here as a narrative device – and to ancient, basic ideas in order to rediscover their potential: projected into the future, such renewed values serve as a groundwork to literally build a new encyclopedia of balance, strength, and positivity. In this project, these basic materials are replaced by books, iconic tools for spreading knowledge down through the centuries. The bricks produced by the Danish company Petersen serve as the base from which culture symbolically evolves, and the modular pieces in the show, conceived by the Kuehn Malvezzi architectural studio, open a door to the hope of continued growth. The link between bricks and the books presented here by Mousse – a publisher at the cutting edge of the international scene – reinforce this idea of a solidity built on knowledge, a concept embodied by material nature of the object-book itself.

If you are in Milan, check out this installation it before it closes !

More pics after the jump… 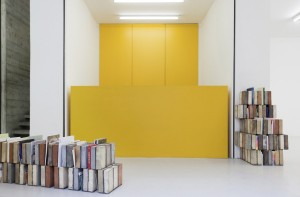 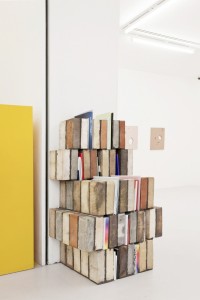