Part of the inaugural season at The Met Breuer, diane arbus: in the beginning highlights never-before-seen early work of Diane Arbus (1923–71). The exhibition features more than 100 photographs focusing on the first seven years of her career, from 1956 to 1962—the period in which she developed the idiosyncratic style and approach for which she has been recognized, praised, criticized, and copied the world over.

Following its presentation at The Met Breuer, diane arbus: in the beginning will travel to SFMOMA (January 21-April 30, 2017).

diane arbus: in the beginning is curated by Jeff L. Rosenheim, Curator in Charge of the Department of Photographs at The Met.
Exhibition design is by Brian Butterfield, Senior Exhibition Designer; graphics are by Anna Rieger, Graphic Designer; and lighting design is by Laura Mroczkowski, Lighting Designer, all of The Met’s Design Department.

The Met Breuer media preview took place yesterday and what an amazing preview it was!

Formerly the home of the Whitney, the Met Breuer in New York City is now the Metropolitan Museum of Art’s new home for its modern and contemporary art collections.

The Met Breuer’s program spotlights modern and contemporary art in dialogue with historic works that encompass the full range of The Met’s vast collection. The building will host both monographic and thematic exhibitions, as well as new commissions and performances. The two inaugural exhibitions at The Met are Unfinished: Thoughts Left Visible, a cross-departmental curatorial initiative that brings together works by some of the greatest artists of all time, from Titian to Louise Bourgeois, who experimented with a non finito style; and the largest exhibition to date dedicated to Indian modernist Nasreen Mohamedi. Additionally, a music installation by Artist in Residence Vijay Iyer will activate The Met Breuer’s Tony and Amie James Gallery in the lobby  throughout March.

For those who could not be there in person, there was the Facebook Live live broadcasting a first look at the building and a walk through of the Nasreen Mohammedi (1937-1990) exhibition with Sheena Wagstaff, Leonard A. Lauder Chairman, Department of Modern & Contemporary Art and Brinda Kumar, who helped curate the show.

I will be sure to be visiting there soon!

END_OF_DOCUMENT_TOKEN_TO_BE_REPLACED

Death Becomes Her: A Century of Mourning Attire Exhibition at the Metropolitan Museum of Art

Photos: © The Metropolitan Museum of Art, by Karin L. Willis

As a native New Yorker who’s DNA has been imprinted with the “adoration of black clothes” gene, this upcoming exhibition targets my love of fashion in one of my favorite colors (I know it’s not a color) !

Death Becomes Her: A Century of Mourning Attire, The Costume Institute’s first fall exhibition in seven years, will be on view in The Metropolitan Museum of Art’s Anna Wintour Costume Center from October 21, 2014 through February 1, 2015. The exhibition will explore the aesthetic development and cultural implications of mourning fashions of the 19th and early 20th centuries.

Approximately 30 ensembles, many of which are being exhibited for the first time, will reveal the impact of high-fashion standards on the sartorial dictates of bereavement rituals as they evolved over a century.

“The predominantly black palette of mourning dramatizes the evolution of period silhouettes and the increasing absorption of fashion ideals into this most codified of etiquettes,” said Harold Koda, Curator in Charge of The Costume Institute, who is curating the exhibition with Jessica Regan, Assistant Curator. “The veiled widow could elicit sympathy as well as predatory male advances. As a woman of sexual experience without marital constraints, she was often imagined as a potential threat to the social order.”

Exhibition Overview
The thematic exhibition will be organized chronologically and feature mourning dress from 1815 to 1915, primarily from The Costume Institute’s collection. The calendar of bereavement’s evolution and cultural implications will be illuminated through women’s clothing and accessories, showing the progression of appropriate fabrics from mourning crape to corded silks, and the later introduction of color with shades of gray and mauve.

“Elaborate standards of mourning set by royalty spread across class lines via fashion magazines,” said Ms. Regan, “and the prescribed clothing was readily available for purchase through mourning ‘warehouses’ that proliferated in European and American cities by mid-century.”

The Anna Wintour Costume Center’s Carl and Iris Barrel Apfel Gallery will orient visitors to the exhibition with fashion plates, jewelry, and accessories. The main Lizzie and Jonathan Tisch Gallery will illustrate the evolution of mourning wear through high fashion silhouettes and will include mourning gowns worn by Queen Victoria and Queen Alexandra. Examples of restrained simplicity will be shown alongside those with ostentatious ornamentation. The predominantly black clothes will be set off within a stark white space and amplified with historic photographs and daguerreotypes.

The Museum’s website, www.metmuseum.org/deathbecomesher, will feature information on the exhibition and related programs.

The ultra-glamorous Charles James: Beyond Fashion Exhibition is set to open next week at the Metropolitan Museum of Art – Anna Wintour Costume Center but social media is all agog over the Met Gala that will be taking place this upcoming Monday, May 5th prior to it’s official opening on Thursday, May 8th.

Unlike last year, the 2014 Met Gala has a dress code and seeing how many guests actually abide by the rules will be keeping a multitude of fashion critics, commentators, pundits, bloggers and curious observers, like me, glued online Monday evening ☺

However, I digress… Charles James, the Anglo-American couturier created masterpieces and this glorious exhibition is dedicated to exploring his legendary and forwarding thinking designs.

As the Met synopsis of the exhibit states:

“…His fascination with complex cut and seaming led to the creation of key design elements that he updated throughout his career: wrap-over trousers, figure-eight skirts, body-hugging sheaths, ribbon capes and dresses, spiral-cut garments, and poufs. These, along with his iconic ball gowns from the late 1940s and early 1950s—the “Four-Leaf Clover,” “Butterfly,” “Tree,” “Swan,” and “Diamond”…”

More than seventy of Charles James’s extraordinary designs will be presented in the new Lizzie and Jonathan Tisch Gallery in the Anna Wintour Costume Center as well as special exhibition galleries on the Met’s first floor.

Also, here is a VIDEOFASHION! clip from the 1982 Brooklyn Museum’s retrospective of James’s work with comments from his former assistant Halston…

You can also watch this video about the complexity of a Charles James creation here  as well as read about his mercurial temperament here in this article from Vogue.

Definitely, this exhibition should be on your “must-see” list before it closes on August 10, 2014.

The Metropolitan Museum of Art hosted a press presentation today at the Museum to reveal early details about The Costume Institute’s upcoming exhibition, Charles James: Beyond Fashion, and the new Anna Wintour Costume Center, both opening on May 8.

Aerin Lauder, Lizzie and Jonathan Tisch, and Anna Wintour joined Museum Director Thomas P. Campbell, Museum President Emily Rafferty, and Curator in Charge of The Costume Institute Harold Koda in the Lizzie and Jonathan Tisch Gallery for a glimpse of some of the James gowns to be featured in the exhibition, on view May 8–August 10, 2014, at the Met in New York City.

Elettra Wiedemann , fashion model and host of her own show on Vogue’s new channel, “Electtra’s GOODNESS” , wore a facsimile of Charles James’s Clover Leaf Gown that had been created to study the dress in motion, since the original, like all accessioned objects at the Museum, cannot be worn.

This is exhibition is a must see !

Jewels by JAR at the Metropolitan Museum of Art 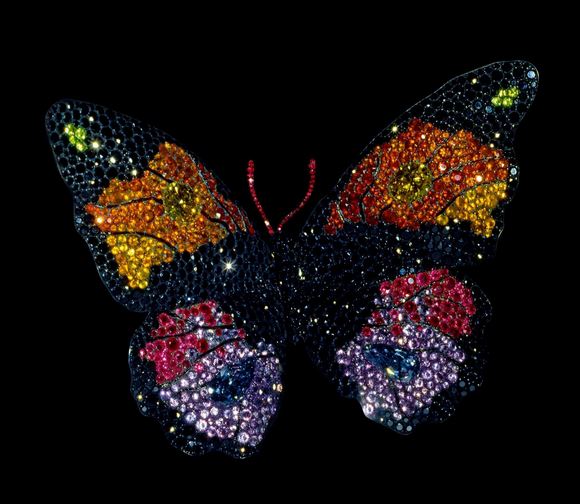 Jewels by JAR is organized by the Department of Modern and Contemporary Art at The Metropolitan Museum of Art. The organizing curator is Jane Adlin, Associate Curator in the department.

JAR makes jewels that fulfill an aesthetic rather than commercial ambition. A particular skill of the JAR team is selecting stones for their color compatibility, complementary range, or contrast. Rosenthal, who once said, “we are not afraid of any materials,” uses metals as strong as platinum and as lightweight as aluminum as bases for his designs. He reintroduced the use of silver in fine jewelry making and blackened the metal to enhance the color of the stones and the shine of the diamonds. The color and the shading of his pavé technique became a signature, as did the diamond thread work 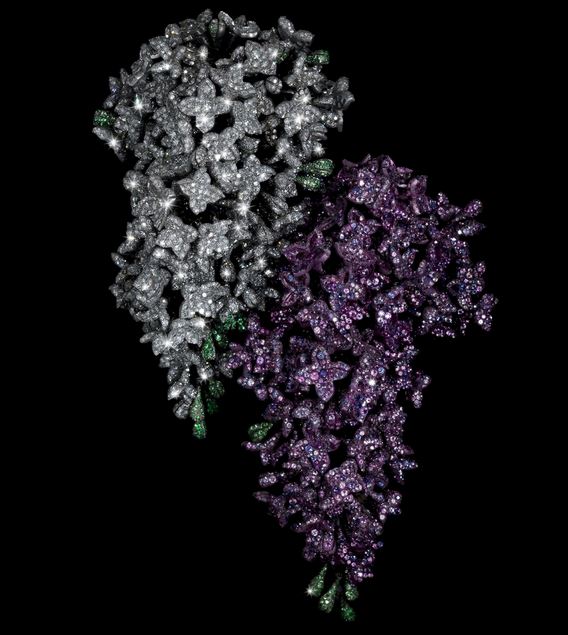 The exhibition is accompanied by an illustrated catalogue (hardcover $40), published by the Metropolitan Museum and distributed by Yale University Press. This would be a lovely holiday gift for a jewelry enthusiast (like me) !!!

Also, in conjunction with the exhibition, JAR has designed a unique collection of earrings and watches for the Museum, available exclusively at the exhibition and Mezzanine Gallery shops.

Images courtesy of the Metropolitan Museum of Art