For Design Miami 2013, Swarovski Crystal Palace has commissioned award-winning, Brazilian architect and designer Guilherme Torres to create an installation inspired by water conservation and stewardship. The importance of water as a resource in the crystal making process led to the creation of the Swarovski Waterschool in 1999. Currently active in many countries worldwide, the Swarovski Waterschool program will expand to Brazil in 2014 to teach school-aged children about water conservation. 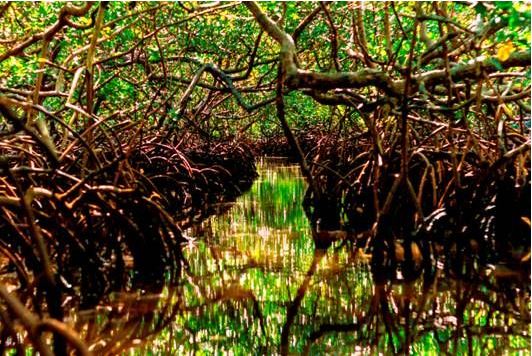 Nadja Swarovski, Member of the Swarovski Executive Board, commented: “We are delighted to be working with Guilherme Torres to create our Swarovski Crystal Palace for Design Miami this year.”

Torres’ built environment occurs at the intersection of the natural, architectural and mathematical spheres. Inspired by Brazilian mangrove forests and the Voronoi diagram (in which space is divided into a number of cells with corresponding focal points), the structure will mathematically explore the balance between nature and science.

Mangrove forests – mangue in Portuguese – have long been considered emblematic of Brazil’s natural beauty and are essential for protecting coastal environments. Torres has deliberately placed the mangrove at the heart of his concept in order to draw attention to the growing conversation around the preservation of Brazil’s endangered aquatic ecosystems.

Torres’s design will incorporate Swarovski’s lead-free Advanced Crystal  that will fill synthetic tubes, linked by geometric joints and lit with energy efficient LEDs. The structure itself will resemble a mangrove forest, with the joints at intervals throughout the space that follow the naturally occurring Voronoi diagram. Visitors will navigate through the space by walking on pathways of certified and reclaimed wood, in between the rising mangrove structures positioned above a shallow pool. Torres’s concept will artistically reflect Swarovski’s commitment to conservation.

“I am always studying nature and science – these are things that fascinate me!” says Torres. “Mathematics is part of my creative process and I feel privileged to be working with Swarovski Crystal Palace. This project has allowed me to think outside of the box and explore the combination of crystals, nature and science.”

To maximize the interplay between the varied shapes and materials, Mangue Groove will be an immersive experience, experimenting with the introduction of light and sound. Each day at 5:00pm, a dynamic mixture of light patterns and sound recordings will slowly grow in movement and tempo, until the environment is marked by the symbols of an Amazonian sunset.

“Torres’ piece is a reflection on the topic of conserving natural resources, a central theme of Swarovski’s newly created foundation. He has brought to life the powerful but fragile beauty of Brazil’s endangered mangrove forests in a resonantly beautiful and inspiring work, continuing his design vision with Swarovski crystal,” says Nadja Swarovski.

A once in a lifetime experience that is definitely on my Design Miami 2013 list to be seen !

Now in its eleventh year, Swarovski Crystal Palace is a groundbreaking project which enables creative visionaries to push the boundaries of design, art, architecture and technology, and redefine the possibilities of crystal. Founded by Nadja Swarovski in 2002, Swarovski Crystal Palace has commissioned design, architecture, and art luminaries including Ron Arad, Zaha Hadid, Tom Dixon, John Pawson, Ross Lovegrove, Tokujin Yoshioka, Tord Boontje, Arik Levy, Yves Béhar, Fredrikson Stallard, and Gaetano Pesce. Their passion, creativity and innovation has delivered a spectacular body of work which provides a snapshot of the most exciting and creative minds of the first decades of the 21st century. Swarovski Crystal Palace has been a Main Sponsor of Design Miami/ since 2008 as part of its mission to promote talent in the worlds of art, architecture, design and technology, while redefining the use of crystal as a material for expression.

Now run by the fifth generation of family members, Swarovski Crystal Business has a global reach, with over 2 350 stores in about 170 countries, 25,135 employees and revenues of 2.38 billion Euros in 2012. Together with its sister companies Swarovski Optik (optical devices) and Tyrolit (abrasive), Swarovski Crystal Business forms the Swarovski Group. In 2012, the Group generated revenues of 3.08 billion Euros and employed 30 600 people. www.swarovskigroup.com

Guilherme Torres is an award-winning architect and designer based in Sao Paolo, Brazil. He was born in Londrina, Brazil and graduated from UNIFIL University in 1998.

Studio Guilherme Torres was founded in Londrina, Parana, Brazil in 2001. The studio moved to Sao Paulo in 2010, and has continued to dedicate itself to building innovative residential and commercial projects. Studio GT also has its own furniture and interiors line and has designed for Mi Casa, the iconic Brazilian design store. Having established itself as a leading architecture and design studio in South America, Studio GT is now moving its focus internationally.

At the center of Studio GT’s practice lies a respect for traditional materials and techniques. Projects are always designed with sustainability in mind. www.guilhermetorres.com