Guild Handcrafted Eyewear is one of my fave design finds for October! Their frames are just what a discerning eyewear connoisseur, like moi, needs to stand out from the rest.

Trying to find frames that stand out and are well-made has been one of my missions ever since I started wearing glasses in college. Over the years, I have only found a handful of frames that meet both criteria, so it’s nice to “discover” a company like GUILD Eyewear that not only has the same aesthetics as I do but also loves eyewear like I do.

The MoMA Design Store announced today that they will be launching their first installation and pop-up store during the week of Art Basel Miami Beach!!!

The Skateroom will be displayed at the Delano , a Morgans Hotel Group property celebrating its 20th anniversary.

This immersive installation will feature limited edition skate decks with artwork by Andy Warhol made in collaboration with The Andy Warhol Foundation for the Visual Arts.

These exclusive skate decks will be available for purchase, in very limited quantities, with percentage of proceeds from the sales being donated to The Skateroom’s non-profit partner, Skateistan, an international NGO initiative that empowers children in third-world countries through skateboarding and education.

I am super-excited because this a trifecta of happiness for me as the MoMA Design Store always has the coolest stuff, the Delano is one of the coolest places on earth and skate decks with Andy Warhol artwork are the coolest decks ever!

So cool, that I had to check out her blog, which is awesome too!

Two of my favorite pens: Montefiore Ballpoint with black ink and Uniball Jetstream 101 with blue ink ♡♡♡♡♡ 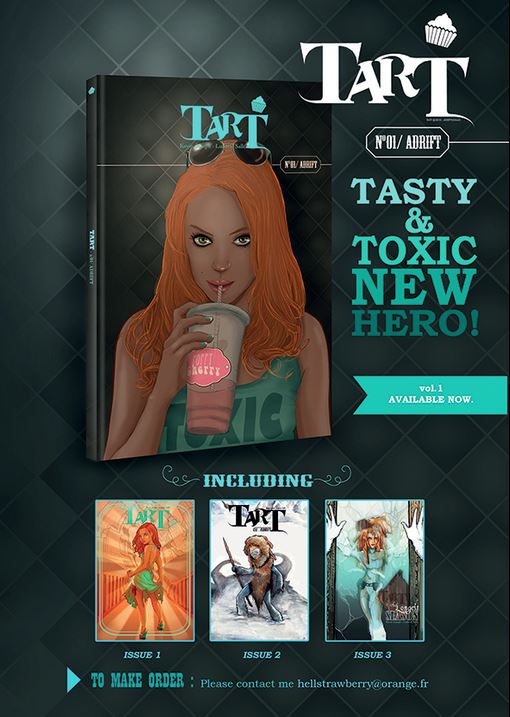 Earlier this year, I had the real pleasure of meeting Kevin Joseph, writer of TART and UnderWars. Not only was he gracious enough to introduce me to his collaborators Ludovic Sallé and C.M. Brennan, he also was kind enough to answer a few questions about his amazing work and his hopes for the future.

Of all the writing genres, what was the appeal of the comic book format?

The appeal to me as a kid reading them was that there wasn’t the let down when you finished one. I remember finishing The Hobbit when I was a kid and being depressed because the story was over (I soon found out about The Lord of the Rings). I’d enjoyed it so much that I didn’t want that world to end for me.

With comics, you didn’t have that problem. When Spider-man ended, no matter how much you enjoyed it, another chapter was coming out next month. With that, I got hooked. Luckily it was the time when comics were valued so highly, so I was able convince my parents that any money I spent on those funny books would be paid back exponentially later in life. The investment part didn’t pan out like I’d assumed, but I think my parents have forgotten that by now.

So my desire to write comics probably came mostly from being a lover of reading books in the medium.

There’s also the reality that in today’s world, making a comic is easier than it’s ever been. Printing isn’t cheap, but it’s affordable. The internet allows me (in my special case) to collaborate on a book with a Frenchmen that I’d never met previously. And even though it’s probably closer to film than any other media, blowing up a car in a comic costs you no more than any other panel, where as with an indie film that might cost you 15 grand. I have two screenplays I’m proud of sitting on my hard drive with no way to get them read, and no ability to make them myself. That doesn’t happen in today’s world of Indie Comics and Crowdfunding.

How did the TART storyline come about ?

Ludo had been working with a series of characters known as The Toxic Fruit and one special lead character named Hell Strawberry for a little while before we met. He’d gotten a lot of work done in building his world, when he stalled out a bit. Fate introduced him to a mutual friend who happened to think we’d work well together (As I’ve joked, if my friend Ana sets you up on a blind date, you better get your ass there, because she knows what she’s doing).

He sent me 8 pages starring Hell Strawberry, and I was mesmerized by the art. Unfortunately, he’d gotten far enough with those characters that even though I got what he was going for, I couldn’t figure out how I’d help. But I woke up a few days later with the idea of a girl waking up alone in an alley without any idea where (or when) she was in the world. But she knew she was there to stop something demonic. I went into the bathroom with my phone and typed that basic start into phone so I wouldn’t forget when I woke up. Over the next week or so I wrote a script that basically became issue 1. It was sort of my audition for Ludo. It was in his world, but stripped down a bit so I could move forward. I liken it to walking into his tool shed and sharpening some of his tools, while ignoring the ones I didn’t know how to use.

Thankfully he liked it and said he wanted to work on it with me.

After that it was months of cross-Atlantic emails figuring out what story we were going to try to tell. What powers do the girls have? Why do they do what they do? Why are they only teenage girls? Who is trying to stop them? Who is trying to help them? Are they the main players in this story, or pawns? Ludo and I, with a lot of help from the aforementioned Ana, worked hand in hand figuring all of these things out so we knew which tools to use going forward.

UNDERWARS goes in a completely different direction than TART – how did that come about?

UnderWars came from a series of paintings my good friend C.M. Brennan did starring a bunch of monkeys in tighty whitie underwear. There was something timeless and classic about such a silly thing that I just fell in love. And with all things I love, I latched my way onto it and made sure I’d be involved when C.M.’s work made him famous.
Whereas Tart is very structured and planned, UnderWars is more freestyle. C.M. and I meet up for coffee or beer and just try to make each other laugh. And when we both laugh it goes in. When one of us laughs we try to figure out a better, funnier version of it. If neither of us laughs we throw it away and move on.

There has been a literal ton of writing done on my end by me saying something ludicrous to my wife. If she laughs, it gets texted over right away. So UnderWars basically exists due to beer and smart phones.

I just wish our schedules worked out better, as we could probably write a comic a day (and he can draw em pretty quick) if we’re ever near each other.

I’m sort of an accidental self-publisher. I only ever wanted to be a writer. But because we ended up on our own, I’m using 2014 as a year to get Kechal Comics organized around Tart and UnderWars. In upcoming years, I have two other series possibilities (one with an existing artist and one without) that I’d love to get cracking on as soon as the minutia of running a business becomes old hat. I think it would be really fun to have 4 comics rotating so each artist had 3 months to complete an issue, but we could still deliver 12 new books a year.

And if we ever get to be financially self-sustaining, there’s an epic fantasy with alternate worlds, elves, dragons and more that I’ll write in the very definite time frame of … someday.

I first came across Ludovic Sallé’s glorious artwork reading TART, the story of a time-traveling demon hunter. In an instance of pure serendipity, I was able to meet TART’s fabulous writer, Kevin Joseph, who in turn graciously introduced me to the Paris-based Sallé.

As this is London Fashion Week, I thought it would be great to have a conversation with him in regards to the importance fashion plays in his work.

TART is about a young woman who travels through time, how important is it that your artwork reflect each time period ?

Actually, since I created the character of Hell Strawberry and the universe of the Toxic Fruit, it was the goal that the characters travel around the world and through time to design new outfits, new styles, new ambiances in each adventure.

In France we used to have this habit of characters who have always the same costume in comic book. I really wanted to design an heroine with a lot of dresses and the sense of Fashion. It’s weird because France it’s a country of comic-books, and a country of Fashion, but it’s two worlds who never work together. I hope Hell Strawberry and Tart will can change that.

Looking at your work for TART/HELL STRAWBERRY I see a definite references from fashion illustrators of the past – which artists influenced your style ?

I have a lot of influences, not especially from fashion illustrators, but I’m really influenced by Art Nouveau, with artists like Alphonse Mucha and Klimt.

In the fashion world I like the costumes from the past, queens dresses, Elizabethan, Victorian, etc…but also the 20th century, from the 1900’s to 1970’s … I like some works of Yves Saint Laurent, Christian Lacroix, Vivienne Westwwood, and Chanel.

All is from the past – from the traditional costumes, from Russia to Africa, we can find inspiration everywhere on Earth. The goal is to imagine new design from this.

What styles do you think are really cool right now ?

What I like, for my characters, is short dress, 1960’s style, with florals print. I also like the 1920’s fashion with Chinese pattern influences.

For me the character outfit is not just a fashion accessory, it’s her armor.Even if it’s a floral dress, it has to be impressive and unforgettable. They are Knights in High Heels!

I love the Renaissance Hotels #RDiscovery !!! There are so many #cool places around the globe and this is a true resource for those who are trying to find them, like me 🙂